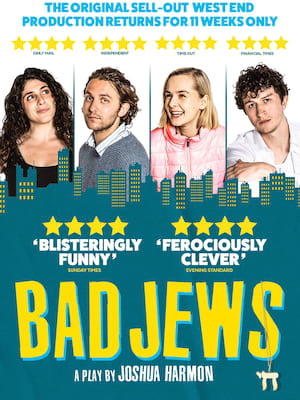 All images, graphics and logos are are property of the production

The night after a beloved grandfather's funeral, four young Manhattanites launch a brutal yet hilariously funny battle for a precious heirloom, in the family row to end all rows. Daphna is fiercely devout and believes she should receive it. But she faces competition with her wealthy cousin Liam, who wishes to use it for the benefit of himself and his non-Jewish girlfriend Melody. His brother Jonah however, couldn't care less about the damn thing, however, he gets dragged into the fray despite his best attempts at staying out of it. As Melody faces the ire of Daphna for not being Jewish and thus not eligible to receive the heirloom, the three cousins turn on each other. But who is most worthy of this item? What is the religious significance behind it? As the night wears on, tempers wear thin and it starts to look like nobody is deserving of the prize.

One hour 40 minutes without an interval

Sound good to you? Share this page on social media and let your friends know about Bad Jews at Arts Theatre.