Sorry! You missed Nativity - The Musical at Eventim Hammersmith Apollo 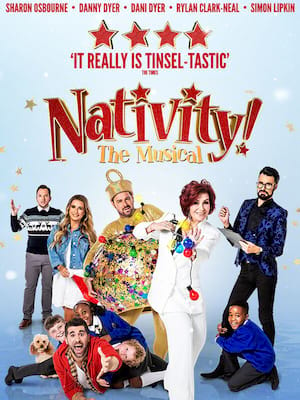 a warm-hearted family show with lively performances, great songs, brilliant sets and lots of cheer and good will

Why See Nativity - The Musical?

Your favourite school is back for 2019! Mr. Maddens has been tasked with directing St. Bernadette's Christmas Nativity, a task that is not for the faint-hearted. To make matters worse Mr. Maddens has told the children and the local community that a Hollywood producer is coming to make their nativity into a movie.

Featuring all the much-loved sing-a-long hits from the movie including 'One Night One Moment', 'She's The Brightest Start' and 'Nazareth'. With Mr. Poppy, played by Simon Lipin, (the crazy assistant), a group of hilarious children and a splash of 'sparkle and shine' this musical is set to give the audience a show full of festive magic, making you ready for Christmas!

*Danny Dyer will not be playing the following performances

*Rylan Clark-Neal will not be playing the following performances

Pepper as Cracker the Dog

Seen Nativity - The Musical? Loved it? Hated it?

Sound good to you? Share this page on social media and let your friends know about Nativity - The Musical at Eventim Hammersmith Apollo.