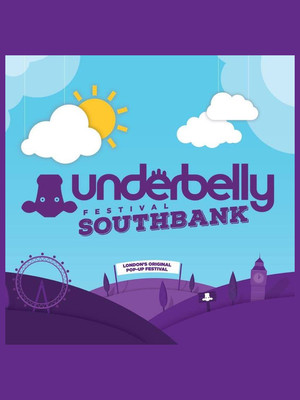 The festival's packed comedy, circus and cabaret schedule sees some of the UK's finest live performers channel the spirit of the Edinburgh Fringe and take to the stage between April and September.

When the howling gale force winds of March turn into the tentative unfurling of Springtime's first buds, the giant inflatable purple cow descends from the heavens and makes camp at the South Bank's Jubilee Gardens green, signalling the arrival of London's annual collision of theatre, dance, cabaret, circus, comedy, music and food that is the Underbelly Festival. Running from the 4th if April to 29th September 2019, the popular capital city festival sprawls along the banks of the Thames, spanning a series of specially built tents on the Southbank including the Belly Theatre and that den of dazzling iniquity the Paradiso Spiegeltent.

This year's line-up is set to be Underbelly's biggest yet! Amongst headline comedy acts and Edinburgh Fringe Festival favorites Josie Long, Jonny Donnahoe, Sarah Pasco, Sarah Kendall and Limmy, this year's chockablock programming includes a two week season of Podcast Live, which brings the insightful audio format's biggest shows to the stage, as well as the all new Family Fest, the perfect Easter holiday filler that features adaptations of popular children's books and kid-friendly circus and comedy events.

The History Of The Underbelly Festival

Founded in 2000 by producers and theatre makers Ed Bartlam and Charlie Wood, the Underbelly events company began life as one small Cowgate venue at the Fringe, growing to become one of the renowned festival's 'Big Four' venue operators. In 2009, they hit London's historic Southbank with the Udderbelly Festival, an 8-week arts program curated in collaboration with the Southbank Centre. Three years later they also launched the circus-centric London Wonderground, a summer affair in the aforementioned big top tent. In 2017, the Udderbelly and Wonderground combined to form the current iteration of the multi-arts extravaganza The Underbelly

Take a look here for show info and tickets!

Sound good to you? Share this page on social media and let your friends know about Underbelly Festival 2019 at Spiegeltent Southbank.