Full Cast Announced For The Seagull

Find out who's joining Emilia Clarke!

The full cast has been announced for Jamie Lloyd's upcoming production of Anton Chekhov's The Seagull. The production is a part of the Jamie Lloyd directed season at the Playhouse Theatre and stars Game Of Thrones' Emilia Clarke.

Joinging Clarke, who makes her West End debut as Nina, will be Danny Ashok as Medvedenko, Robert Glenister as Sorin, Tom Rhys Harries as Trigorin, Daniel Monks as Konstantin, Tamzin Outhwaite as Polina, Patrick Robinson as Dorn, Seun Shote as Shamrayev, Indira Varma as Arkadina and Sophie Wu as Masha.

This 2020 production is adapted by Anya Reiss and features design by Sumatra Gilmour.

What Is The Seagull about?

A group of well-heeled guests gather at the country house of a retired civil servant, to see a new avant-garde play that his young nephew has written. A bit of a hack job with an emphasis on symbolism, the play is a disaster and is abandoned after the first act. With emotions running high after the aborted performance, we discover a tangle of love triangles amongst the characters, self-doubt and a rampaging pursuit of happiness that threatens to overturn everybody's beliefs and sensibilities.

Tickets for The Seagull are now on sale! 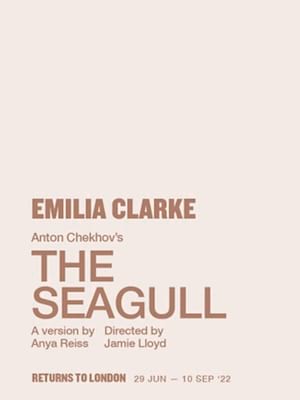 We need the theatre, couldn't, couldn't do without it. Could we?