Did & Juliet Blow The Critics Away?

Now playing at the Shaftesbury Theatre

Forget Romeo and Juliet, it's all about & Juliet the brand new musical which opened at the Shaftesbury Theatre on 20 November. Featuring the hits of Max Martin ("Roar", "It's My Life") what did the critics think of this jukebox outfit?

The Stage was full of praise for the production, saying that it was a "Fantastic new musical" before dubbing it as the "apotheosis" of the jukebox musical. They added, "Sure, the first time the cast members stop speaking, pause, and then break into a Britney banger it's utterly baffling. But soon you're chasing the next glorious musical high. Every time a character sings the first line of a song you recognise, it brings a little surge of glee, be it I Kissed a Girl, or Since U Been Gone."

The Independent were also full of praise for the Luke Sheppard helmed musical, calling it "A gloriously silly, unexpectedly poignant production" before continuing with, "Written by Schitt's Creek's David West Read, & Juliet is witty, too - affectionately ribbing the more icky and melodramatic elements of Shakespeare's story."

Time Out London mirrored this sentiment saying, "'& Juliet is heavily ironic Shakespeare rewrite based on the songs of super-producer Max Martin. And with the gift of that knowledge, I can fairly confidently state that you'll probably like '& Juliet'". They continued with "The plot is fun provided you refuse to take any of what happens seriously. It's basically 'Romeo & Juliet' rewritten into a sort of woke panto."

Like what you've read? Book your tickets to & Juliet here!

Miriam-Teak Lee as Juliet in & Juliet. 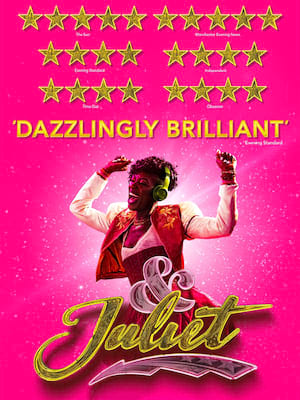