British comedy legend Jennifer Saunders has returned to the London stage once more as she stars in Noel Coward's classic comedy, Blithe Spirit. But, what did the critics think?

The Independent were full of praise for the production, especially for Saunders, with "As the psychic Madame Arcati in this marvellous production, Saunders channels AbFab's Edina - only with more intrepidity". They also praised director Richard Eyre calling his revival "inspired".

The Stage continued the praise with "Madame Arcati is a gift to actors, especially those with as acute and ingrained a sense of comedy as Saunders. Her Acarti has a solid, earthy quality. Her thick eyebrows, lank hair and sensible shoes suggest someone who's spent the day in the potting shed rather than engaging in 'ectoplasmic manifestations'".

The Arts Desk mirrored the sentiment, calling Richard Eyre's production "intelligent" and praised the other members of the cast with, "The central trio - Geoffrey Streatfield (Charles), Lisa Dillon (Ruth) and Emma Naomi (Elvira) - are excellently nuanced."

Want to see Blithe Spirit for yourself? Book Your Tickets Here!

What is Blithe Spirit about?

When Charles Condomine and his second wife Ruth invite eccentric medium Madame Arcati (Saunders) to conduct a seance at their home all hell breaks loose, literally. As Charles' first wife Elvira returns to the human world (only visible to Charles) she is determined to ruin her husband's new marriage, no matter the consequences...

Blithe Spirit is now playing at the Duke of York's Theatre through to 11 April. 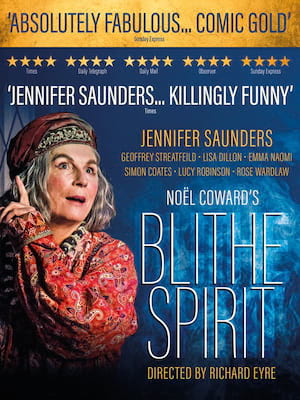 As the psychic Madame Arcati in this marvellous production, Saunders channels AbFab's Edina - only with more intrepidity