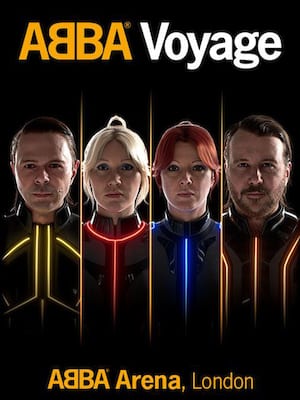 Take a chance on ABBA with this stunning concert expereince

It's ABBA this world!

ABBA invite you to transcend the physical world and join them on the digital plane with this landmark concert experience. Using the latest in motion capture technology, the band will appear on stage as they were in their glory days in the form of holographic avatars (ABBAtars), accompanied by a real 10-piece live band. Taking you through all their massive hits, ABBA Voyage is the closest thing to time travel ever seen on the stage. Don't miss its premiere run at the custom-built ABBA Arena.

What the kids might call a 'banger factory', ABBA are one of the most successful pop acts of all time. Bursting onto the international stage with their iconic Eurovision Song Contest appearances, their heavenly pop beats with universal lyrics won them fans the world over. From the upbeat fun of 'Dancing Queen' to 'Mamma Mia' to more introspective hits like 'The Day Before You Came' and 'The Winner Takes it All', they manage to capture many shades of the human condition, resonating with audiences through generations. With the 1999 premiere of the musical Mamma Mia!, and its subsequent two film adaptations, and now this exciting new concert experience, they continue to adapt, despite being in the 'biz for over five decades. Everyone now, THANK ABBA FOR THE MUSIC!

The concert involves the use of extensive flashing lights, kinetic lighting, lasers and strobing light effects.

Children under 3 will not be allowed into the venue, those 16 or under must be accompanied by an adult and may not sit in the arena on their own. The General Admission area is not recommended for anyone younger than 16.

Sound good to you? Share this page on social media and let your friends know about ABBA Voyage at ABBA Arena.