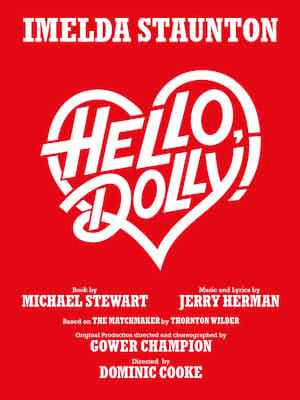 Imelda Staunton and Jenna Russell star in this new production of Hello, Dolly!

A Slice Of Broadway Glamour In London!

Olivier and BAFTA winner Imelda Staunton returns to the West End as she stars as Dolly Levi in Dominic Cooke's new London production of Hello, Dolly! With music and lyrics by Jerry Herman and a book by Michael Stewart Hello, Dolly! is a slice of old Broadway glamour which will set London a dazzling from August. Staunton will be joined by Olivier award winner, Jenna Russell, who stars as Irene Molloy.

Featuring musical theater hits like "Put On Your Sunday Clothes" and "Before The Parade Passes By" Hello, Dolly! took the theatre scene by storm when it debuted on Broadway in 1964. With the late and great Carol Channing starring in the titular role, the production went onto win an unprecedented TEN Tony-Awards! Since its inception Hello, Dolly! has attracted some of theatre's greatest Divas to the role of matchmaker Dolly, including Barbra Streisand, Bernadette Peters, Bette Midler, Betty Buckley and now Imelda Staunton!

What is Hello, Dolly about?

In 1880's Yonkers a rich and cantankerous widower by the name of Horace Vandergelder is on the lookout for a wife. To help him on his quest he engages the services of professional matchmaker Dolly Gallagher Levi, but little does he know that Dolly has his perfect match in mind from their very first meeting - herself! Now all she has to do is make Horace realise it as well!

A certified stage and screen icon Imelda Staunton has starred in the "Harry Potter "franchise, "Vera Drake" (for which she won the BAFTA award for Best Actress in a Leading Role), "Shakespeare in Love", "Maleficent" and many others. Her West End credits include Gypsy, Sweeny Todd, Follies, Uncle Vanya and Into The Woods.

Jenna Russell garnered an Olivier award for her turn in Sunday in the Park with George, and went onto garner a Tony nomination for the role when the production transferred to Broadway. Her other stage credits include The Bridges of Madison County, Fun Home and Merrily We Roll Along.

Sound good to you? Share this page on social media and let your friends know about Hello, Dolly! at Adelphi Theatre.