Sorry! You missed An Evening with Sophia Loren at Aldwych Theatre 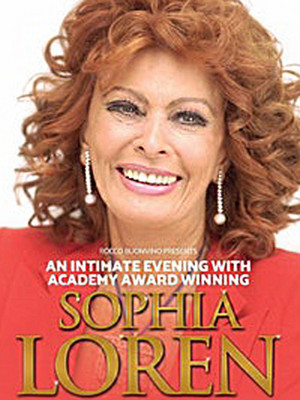 An Evening with Sophia Loren

Why See An Evening with Sophia Loren?

You're invited to delve into the career and personal life of Italian actress and singer Sophia Loren as she makes her West End debut. Hosted by radio and television presenter Jonathon Ross, not only will you learn about Loren's extraordinary life, but you'll also have the opportunity to have your questions answered in the closing Q&A.

Throughout her incredible career, Academy Award-winning actress Sophia Loren has received critical acclaim for her roles in many films, and has also won many more awards. But we reckon no award adds up to her experience of working alongside multiple legends, sharing the big screen with Paul Newman, Charlton Heston, Marlon Brando and many more.

Loren is usually reluctant to give interviews, so this is definitely one experience you don't want to miss.

Sound good to you? Share this page on social media and let your friends know about An Evening with Sophia Loren at Aldwych Theatre.