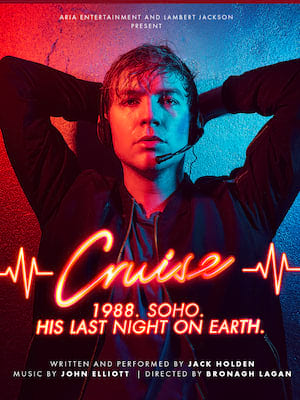 A solo show set in Soho

A new solo show written by and starring Jack Holden, Cruise returns to the West End this summer for a strictly limited run at the Apollo Theatre. It's 1988, Michael is HIV-positive, and tonight is his last night on earth. Only thing is, it doesn't quite go to plan. Can we learn to live today with the mistakes of yesterday and, if we do, what will our tomorrow look like?

Based on a true story heard by Holden whilst volunteering on a helpline, Cruse explores hedonism and hope in the face of the unthinkable. It's an uplifting, exuberant tribute to life all set in late-80s Soho, London. And it's underlying message is particularly relevant today as we brace ourselves for the lifting of lockdown and a summer like no other. Jack Holden's solo performance is illuminated by an 80s soundtrack, performed live by John Elliott.

"Michael got lucky. He's been given the gift of life; but what kind of life can he now live?"

What is Cruise about?

After Michael Spencer is given four years to live, he and his partner decide to make the most of his time left. They sell all their possessions and devote the remainder of their lives to please. Except for Michael, it isn't the remainder of his life... there's unexpectedly more. How does one come back from what was meant to be your final glory days and find purpose again?

Seen Cruise? Loved it? Hated it?

Sound good to you? Share this page on social media and let your friends know about Cruise at Apollo Theatre.