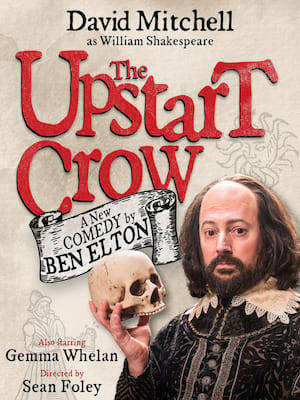 The most consistently funny and expertly staged comedy since Richard Bean's One Man, Two Guvnors

All the world's an audience

Nominated for Best New Comedy at the 2020 Olivier Awards

Forsooth! Direct thine eyeballs hither and rejoice in the knowledge of this theatrical spectacular, starring comedian, actor, and panel show veteran David Mitchell is returning to the West End. Reprising his role as the history's greatest playwright from the sitcom of the same name, Mitchell is joined by returning co-star Gemma Whelan in this venture penned by Ben Elton. Speaking of the transition from screen to stage, he promised that "Theatre-goers can look forward to a comedy steeped in authentic Shakespearean ambiance in every way apart from the smell."

Delighting viewers on BBC 2 since 2016, Upstart Crow tells the story of The Bard as he sets out to become a successful playwright, amidst the chaos of family life, ambitious actresses and the commute from Stratford Upon Avon to London. For this iteration, the action moves to 1605 where old Will is tasked with creating a hit following the flops of his last two attempts, Measure for Measure and All's Well That Ends Well. Continuing with the show's irreverent look at Shakespeare and the bawdy times he lived in, expect a ribald comedy that'll perfectly bust those winter blues!

So funny I nearly wet my puffaling pants. more

Sam : “Literally a laugh a minutes ”

Having thoroughly enjoyed the tv sitcom I was incredibly excited at the... more

Sound good to you? Share this page on social media and let your friends know about Upstart Crow at Apollo Theatre.