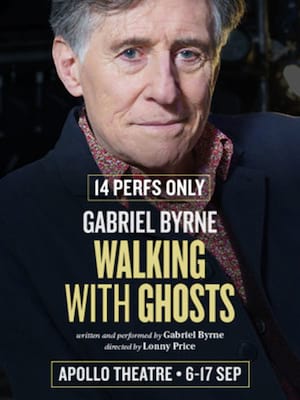 One of Ireland's finest performers at his very best

Why See Walking With Ghosts?

Fresh from a highly acclaimed run in Dublin multi-award-winning actor Gabriel Byrne will be bringing his new one-man play Walking With Ghosts to the Apollo Theatre this autumn. Adapted from his 2021 memoir of the same name and directed by Lonny Price, the solo show lays bare Gabriel's childhood on the outside of Dublin and the people he met there, to his success in Hollywood and beyond.

One of Ireland's most celebrated actors, Byrne has worked steadily from the late 1970s. While has appeared on Broadway multiple times, he cites the West End as a spiritual home, saying "It's where I had my first experiences of theatre outside of Dublin so it had a faraway magical allure. I've seen some great plays there so being there has been a great ambition of mine."

Playing at the Apollo for a limited two week run from the 6th-17th of September, don't miss your chance to see Byrne live in this poignant love letter to the people who make us.

Seen Walking With Ghosts? Loved it? Hated it?

Sound good to you? Share this page on social media and let your friends know about Walking With Ghosts at Apollo Theatre.