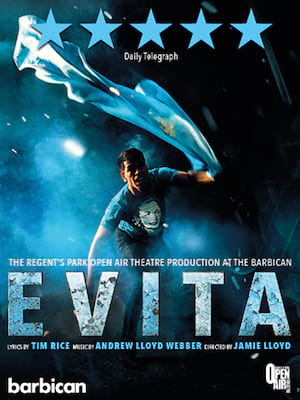 A work of screaming fun...Andrew Lloyd Webber's musical is so often staged it's tough to make it fresh, but Jamie Lloyd and co rise to the challenge

Don't cry for me Argentina

Nominated for Best Musical Revival at the 2020 Olivier Awards!

After wowing critics and audiences at the Regents Park Open Air Theatre last year, the Jamie Lloyd directed production of Tim Rice and Andrew Lloyd Webber's iconic Evita transfers to the Barbican in June for eight weeks only!

Full of some of musical theatre's biggest tunes ("Don't Cry For Me Argentina", "Oh What a Circus", "You Must Love Me" and "Another Suitcase In Another Hall") Evita has been safely inaugurated into the musical theatre canon. Charting the rise of Eva Peron, wife of Argentine dictator Juan Peron, Evita is a stunningly beautiful and glittering production that captures the hearts of fans old and new whenever it plays.

What is Evita about?

Set in late 1940's Buenos Aires, this multi-award winning musical follows the controversial South American figure from her early life as an ambitious actress, her rise to power as Argentina's dynamic First Lady and would-be vice president, through to her eventual early death from cancer. The choric character of Che narrates the story and represents the simple and poor Argentinean workers who loved, admired and supported Eva.

Seen Evita? Loved it? Hated it?

Sound good to you? Share this page on social media and let your friends know about Evita at Barbican Theatre.