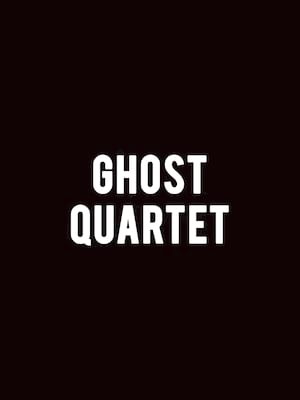 Mr. Malloy and company find new ways for guaranteeing that this exultant production's melody lingers on, in the finest tradition of phantoms that never say die.

The Grand Opening Of The Boulevard Theatre

Soho's brand new Boulevard Theatre opens its doors with the stunning UK premiere of Ghost Quartet, the soaring modern fairy tale written by Dave Malloy, the Tony-nominated writer of the critically acclaimed Broadway smash Natasha, Pierre & The Great Comet of 1812. Malloy collaborates with Skyfall director Bill Buckhurst and the creative team behind the Tooting Arts Club-turned-West-End-transfer Sweeney Todd, bringing a whirlwind of myth, magic and music to the stage in the form of a song cycle.

Exploring why people want to believe in ghosts and how stories live on long after they pass away, Ghost Quartet collides a myriad musical styles including folk balladry, electro-pop, doo-wop, honky-tonk and New Orleans jazz in the style of Thelonious Monk to tell the tale of Rose. Betrayed by her lover and her sister who carry an affair out behind her back, she finds an opportunity to enact vengeance when she meets a bear with a curious solution. His services come at a price however, and Rose must procure him a pot of honey, a sectret baptis, a photo of a ghost and a piece of stardust.

Sound good to you? Share this page on social media and let your friends know about Ghost Quartet at Boulevard Theatre.