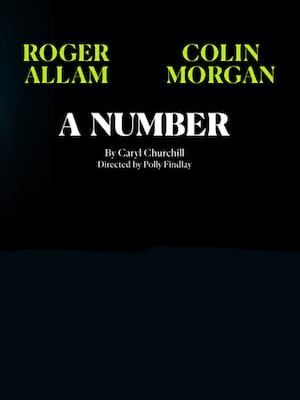 What a tremendous play this is, moving, thought-provoking, and dramatically thrilling.

Why See A Number?

Roger Allam and Colin Morgan, both fresh from separate runs at the National Theatre, make their Bridge debuts as a strained father and son in Carol Churchill's unsettling examination of the ethics of artificial creation.

First premiering in 2002 at the Royal Court, A Number introduces us to Salter, a father whose desperation and ruined pride led him to do something extraordinary to his own son - cloning him in the hopes he'll be able to right past wrongs as he raises the copy. But when the new 'son' finds out, it looks as if Salter has more than just his own vanity to answer for...

Winner of the Evening Standard Award for Best Play, this controversial work may be set in the near future, but the questions of identity, family, and guilt it raises are very much of our time.

Roger Allam as Salter
Colin Morgan as B1, B2 and Michael Black

Seen A Number? Loved it? Hated it?

Sound good to you? Share this page on social media and let your friends know about A Number at Bridge Theatre.