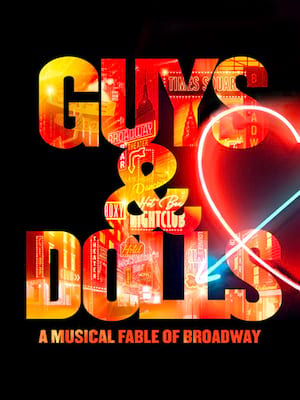 The biggest party to hit The Bridge Theatre

Why See Guys and Dolls?

I've always been a bad guy

You're invited to the biggest party as The Bridge Theatre transforms into one of the greatest musicals of all time, Guys and Dolls! You'll be wrapped around all the action with this immersive experience, where you'll be transported to the bars of Havana and the streets of Manhattan. With more laughs, more romance and more hit songs than any show, it's bound to be one experience you don't want to miss.

what is guys and dolls about?

A swinging tale of gangsters, gamblers, and molls, Guys and Dolls is one of the all-time classic American musicals. The show originally premiered on Broadway in 1950 and picked up five Tony Awards, including Best Musical. Five years later it was adapted for the silver screen with Frank Sinatra and Marlon Brando. The story follows the escapades of gamblers Nathan and Sly, who are prepared to bet it all for love. Set on the glittering, jazz-age streets of New York, Guys and Dolls features some iconic musical theatre numbers, including 'Sit Down, You're Rockin' the Boat,' 'Luck Be a Lady'.

Seen Guys and Dolls? Loved it? Hated it?

Sound good to you? Share this page on social media and let your friends know about Guys and Dolls at Bridge Theatre.