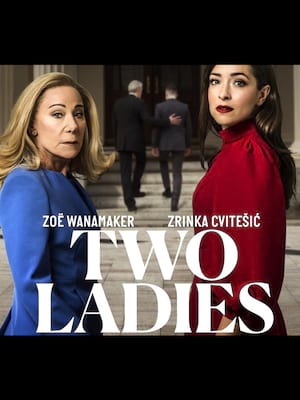 Wanamaker growls with lethal disdain, her asperity as deliciously artful as her (excellent) wig, and Cvitesic (an Olivier-winner for her role in the musical "Once") matches her with a cool mixture of world-weariness and watchful duplicity.

Behind Every Great Man Is An Even Greater Woman

The first rule of politics is 'keep your enemies close and your wives closer', an adage that rings true in award-winning Irish playwright Nancy Harris' riveting political drama Two Ladies. A powerful mediation on women in politics, as well as what it's like to be in close proximity to power but not to directly wield it, the critically acclaimed drama continues its run at The Bridge Theatre in London, with direction from Sir Nicholas Robert Hytner (One Man, Two Guvnors, The History Boys, Miss Saigon).

Two-time Olivier Award-winner Zoe Wanamaker stars as Helen, the wife of the French president, whilst Croatian film actress Zrinka Cvitesic's stars as Sophia, the wife of the American president. The pair come together behind the scenes whilst their husbands talk international policies and protesters become belligerent outside. With the stakes increasingly becoming higher, their initial frostiness thaws and they open up to each other about the frustrations of lives lead behind their husbands.

Sound good to you? Share this page on social media and let your friends know about Two Ladies at Bridge Theatre.