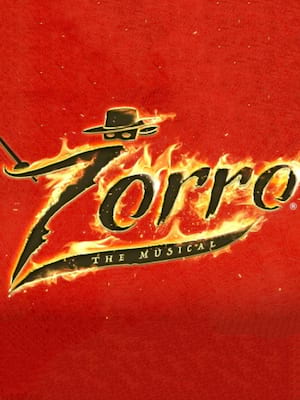 Why See Zorro, The Musical?

Music by the Grammy nominated Gipsy Kings and Les Miserable composer, John Cameron, and based on the fictional biography by Isabel Allende, the masked crusader Zorro has grossed over a million worldwide. Featuring famous hits including 'Baila Me' and 'Bamboleo' this revival is set to take London by storm!

What is Zorro About?

A wealthy young Caballero, Don Diego de la Vega, is sent away to school in Spain on the instruction of his father, leaving behind his childhood sweetheart, Luisa. Unhappy at his new school Diego runs away with a band of gypsies and soon becomes their star performer. One night, to his astonishment, Diego sees Luisa in the crowd. She tells him that his father has died and pleads with him to return to California. Ramon, a childhood friend of them both, and promoted to head of the army by Diego's father, has become an unstoppable tyrant who is victimising the poor and exploiting the rich.

Diego returns and soon witnesses first-hand the cruel behaviour of his old friend. Diego also learns that his father is not in fact dead but being held captive by Ramon. Diego knows that he must take action. With the help of an old friend, Inez, he sets out his plan to liberate the people and overthrow Ramon. Zorro is born and the battle begins.

Zorro began as a five instalment story 'The Curse of Capistrano' in the pulp magazine, All Story Weekly. Zorro is the Spanish word for Fox.

Zorro, The Musical, is suitable for audiences aged 7 and upwards

Just seen Zorro at the Garrick and it was fantastic. We had a great night... more

Sound good to you? Share this page on social media and let your friends know about Zorro, The Musical at Charing Cross Theatre.