Sorry! You missed Big - The Musical at Dominion Theatre 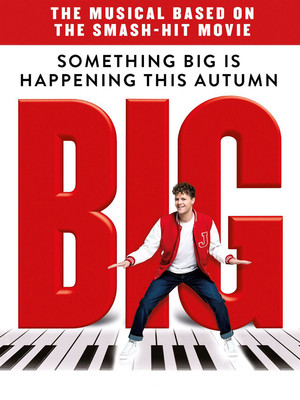 BIG shoes to fill... but this musical is a real whopper

Why See Big - The Musical?

THE HIT FILM BECOMES A MUSICAL

The movie that launched a thousand wishes for giant floor keyboards, 1988's Big is on its way to tickle the ivories in the West End! The story of one Josh Baskin, a pre-teen frustrated with being treated like a kid, who wishes he was a grown-up, follow him as he wakes up one morning to find his greatest wish granted -  he's now a 30-year-old man (bless!).

Featuring one of Tom Hanks' finest performances committed to celluloid, Big captured hearts and imaginations as we saw Josh navigate the choppy waters of adulthood - including demanding bosses and (questionable) romances -  before realising that being 'Big' ain't all it's cracked up to be.

Now retooled for the West End stage following a memorable experience on Broadway back in 1996, Big - The Musical has a book by John Weidman, music from David Shire and lyrics from Richard Maltby Jr. Casting is yet to be announced.

So get ready with to tap out chopsticks on the pavement, as this fantasy gem from your childhood comes to town this Autumn in a sparkling new production!

Directed and choreographed by Morgan Young

Sound good to you? Share this page on social media and let your friends know about Big - The Musical at Dominion Theatre.