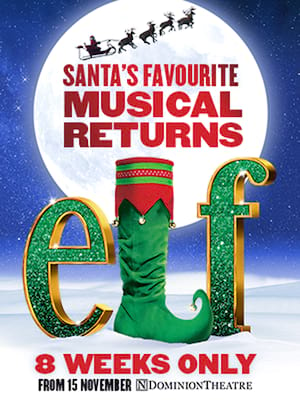 All images, logos, and graphics are property of the production

A ridiculous hoot... the show has a core of genuine, touching charm and innocence.

Why See Elf: The Musical?

Buddy the Elf is stepping into the Dominion Theatre this Christmas, all the way from the North Pole! This hit musical is based on the movie starring Will Ferrell and first premiered on Broadway in 2010 with a score by Matthew Sklar and Chad Beguelin.

what is the story?

When Santa is out delivering his presents to the world's children, unbeknownst to him he has picked up an unexpected present of his own; an orphaned baby boy has crawled into his present sack, and he is unknowingly whisked off to the North Pole. Years later, the boy, named Buddy by Santa, has grown up to adulthood - very much standing heads, shoulders (and waist) above the other elves and poorly skilled at toy-making. He is confronted with a startling truth; he is not in fact an elf, but a human. With Santa's blessing, he leaves the safety of the North Pole and sets off alone to the bright lights of New York City to discover his real birth family.

Initially full of hope and joy, when he arrives in the Big Apple, he receives a shock; the native New Yorkers are seriously lacking in Christmas spirit, and his birth father Walter is a cynical and mean-minded book publisher who is more concerned with the bottom line rather than spending time with his family.

So you can imagine Walter's horror when a fully-grown man dressed as an Elf walks into his plush offices and announces that he is in fact his son! Determined to avoid taking him under his wing, this is in stark contrast to Walter's long-suffering but kindly wife and son Michael, Buddy's younger half-brother.

When Christmas is threatened by the lack of cheer to power Santa's sleigh, Buddy is tasked with injecting the Christmas spirit into the whole of New York to save Santa's night and to reconcile his new family - will he be able to succeed, or continue causing chaos around him? And who is the enigmatic department store girl with the beautiful singing voice?

This critically acclaimed musical is set to be a joyful addition to London Christmas theatre at the Dominion, with enough hi-tech wizardry and songs to keep the kids engrossed, as well as plenty of in-jokes for the adults to enjoy.

The musical broke records at Broadway's Al Hirschfeld box office THREE times, grossing over a million dollars in one week in 2010. SANTAAAAAA!!!!

Suitable for humans (and elves) from ages 3+

I'd like to have spaghetti and syrup with Elf for breakfast.

Michelle Copeland: “Stick to the film”

Someone should let the creators of this shambles know that for a musical... more

Sound good to you? Share this page on social media and let your friends know about Elf: The Musical at Dominion Theatre.