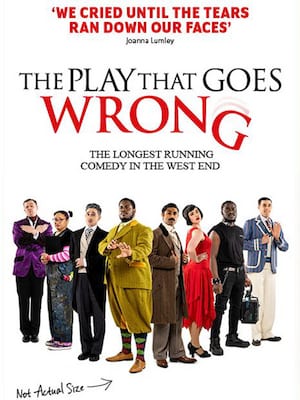 The Play That Goes Wrong

We laughed until the tears ran down our faces

Why See The Play That Goes Wrong?

Scripted by Henry Lewis, Jonathan Sayer, and Henry Shields, (otherwise known as the minds behind Mischief Theatre) The Play that Goes Wrong landed in London at the Old Red Lion Theatre in 2012, before moving to Trafalgar Studios in 2013, where it was heralded by Telegraph theatre critic Charles Spencer as the funniest thing he'd seen since Noises Off. After winning Best New Play at the 2015 Olivier Awards, the first of four countrywide tours soon followed, before the show made the jump across the pond in 2017.

In the years since, TPTGW has served as a cornerstone of the still-growing Mischief Theatre empire, which has gone on to dominate the West End with more bonkers productions, including Magic Goes Wrong, The Comedy About A Bank Robbery, and Christmas panto send up - Peter Pan Goes Wrong. They've even made the jump to TV, with The Goes Wrong Show debuting on BBC 1 in 2019.

What's The Play That Goes Wrong About?

After benefiting from a large and sudden inheritance, the inept and accident-prone Cornley Polytechnic Drama Society attempts to put on a 1920s murder mystery play in the West End. But as the hopeless thesps discover to their horror, everything that could go pear-shaped, does, with hilarious consequences. Corpses that can't lie still, props that disappear and reappear at the wrong time, and a set that is literally falling apart will all ring true to any amateur performers out there (although hopefully, not quite to this degree). Couple all this with a Butler whose talent for garbling simple phrases is rivalled only by Fawlty Towers' Manuel and you have a production that probably won't be up for any Olivier Awards anytime soon...

Two hours and five minutes including a 20 minutes interval

Jools: “Just the most hilarious thing I've ever seen!”

If you like to laugh your socks off, this is a most worthwhile way to spend... more

Sound good to you? Share this page on social media and let your friends know about The Play That Goes Wrong at Duchess Theatre.