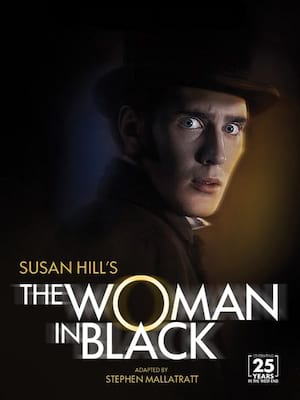 The Woman in Black

Why See The Woman in Black?

This adaptation of Susan Hill's gothic novella received its London premiere at the Lyric Hammersmith in 1989. It transferred to the Fortune Theatre later that year and has been going strong ever since. In fact, it's the second longest running non-musical play in the city, after Agatha Christie's The Mousetrap!

Over thirty years later and this theatrical tour-de-force has lost none of its power to terrify. Adapted by Stephen Mallatratt, this stage version ingeniously turns Hill's novel into a two-man show, which is played out on a sparsely decorated set and employs every tension ratcheting sound and light effect in the book. If that wasn't enough, the action isn't confined to the stage, so you never know just where the Woman in Black is going to appear next.

What is The Woman in Black About?

Retired solicitor Arthur Kipps is still haunted by the strange events which took place in a small English village, Eel Marsh, years before. Sent on a routine assignment to look over a widow's legal papers, Kipps encountered a mysterious spectre known as The Woman in Black, a ghostly figure who seems intent on taking the lives of Eel Marsh's young children.

Hoping to exorcise the demons of his past, Kipps calls on a young actor to recreate the events of Eel Marsh in the form of a play. The actor plays the part of Kipps, while Kipps himself takes on the roles of all those characters whom he met during that terrible visit. Unfortunately, this play seems to raise more ghosts for Kipps than it banishes...

The Woman in Black is suitable for children aged 8 and over. Children aged under 5 will not be admitted to the Fortune Theatre.

Two hours with one interval after 50 minutes.

Please Note: Please be advised that due to The Woman in Black being on the school syllabus, it is common for large school parties to be attending all performances of this production.

i have just seen an interview on tv with robin hreford and it took me back... more

I went to see this play for my GCSE course. I had absolutely no idea what... more

Sound good to you? Share this page on social media and let your friends know about The Woman in Black at Fortune Theatre.