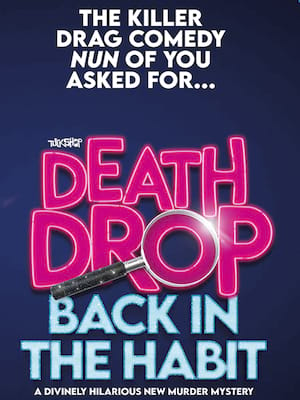 If you're looking to add some sparkle and swagger to your end of year festivities, then Ru Paul's Drag Race alumni Courtney Act and Monet X Change have just the ticket for you! The celebrated and iconic queens are set to make herstory on the West End by bringing together a full cast of drag performers during 'Death Drop', a campy, vampy, trampy send-up of the classic English murder mystery story.

Set in 1991, a gaggle of outrageous guests gathers on Tuck island to wine and dine the night away. But as with all murder mysteries, death hides amidst the taffeta, rhinestones and perfectly styled wigs. Tensions boil as each guest reveals their murky past and the body count rises. Expect drama, shade, gags and glamour!

Sound good to you? Share this page on social media and let your friends know about Death Drop at Garrick Theatre.