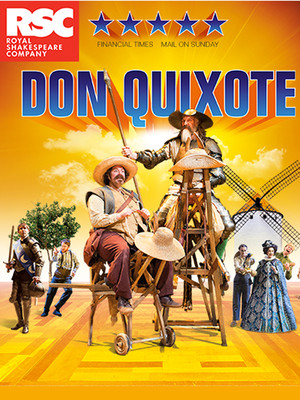 ...a fun and playful epic that bubbles over with imagination

Taking over the Garrick Theatre this October

After a stellar run at the Royal Shakespeare Company's Swan Theatre, Don Quixote makes its West End transfer this autumn with stars of the show, Rufus Hound and David Threlfall in tow as Sancho and Quixote respectively.

Thou hast seen nothing yet

Based on the book by Miguel de Cervantes, Don Quixote tells the tale of one man's quest to become a chivalrous knight. After reading book after book about the brave knights of old, Don Quixote decides it's his turn. With his faithful servant, Sancho Panza, by his side the pair set out across medieval Spain, vanquishing the crooks and defending the poor. But, after each calamitous encounter Don Quixote's beloved stories seem to becoming further away from the truth.

Rambunctious, eccentric and hilarious, enjoy this dazzling new production that takes us into the mind of one of literature's greatest (and silliest) heroes!

Images taken from the RSC's 2016 production at the Swan Theatre.

Sound good to you? Share this page on social media and let your friends know about Don Quixote at Garrick Theatre.