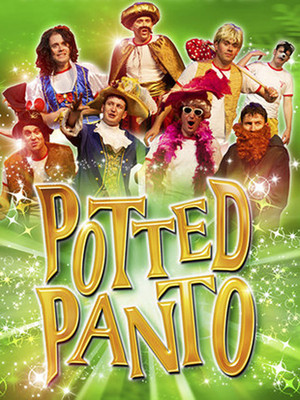 A show full of enjoyably terrible jokes, manic costume changes, buckets of poo and a spirit of anarchic goodwill.

Christmas 2021is saved! The Olivier-winning brains behind Potted Potter are back in the West End this Christmas, with their popular Potted Panto show, dedicated to the age-old British tradition of pantomime. Styled in a similar vein to their world-conquering touring show Potted Potter, two madcap performers will whisk you through seven classic pantos in a frenetically funny 80 minutes. Aladdin, Cinderella, Sleeping Beauty, Dick Whittington and Snow White all make an appearance in this two-hander.

Children's TV presenters Daniel Clarkson and Jefferson Turner first cut their teeth in entertainment on CBBC between 2008-09 and have since gone onto win accolades for their joint stage shows that make popular culture more manageable and family friendly, including projects such as Potted Potter, Potted Sherlock and Potted Pirates. Their 2015 production Potted Sherlock took fans through all 60 of Arthur Conan Doyle's stories in 70 minutes, however, it was their 2016 show Potted Potter that took London by storm, and has since toured the world, playing to always packed audiences of muggles (and maybe a few wizards as well).

One hour 30 minutes including interval

Sound good to you? Share this page on social media and let your friends know about Potted Panto at Garrick Theatre.