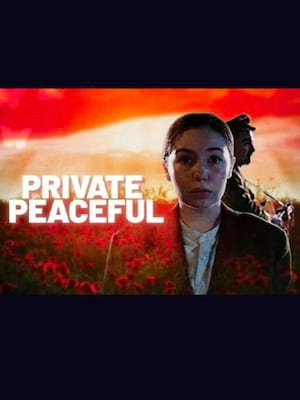 A Powerful Mediation on the Senselessness of War

Warhorse author Michael Morpurgo's award-winning children's story comes to life at the Garrick Theatre this holiday season. Previously seen on the West End, the Bristol Old Vic and the Edinburgh fringe, Private Peaceful was adapted for the silver screen in 2004 and tells a heartbreaking tale of the senselessness of war.

Morpurgo was first inspired to write the story when he came upon a grave marked "Private Peaceful" during a trip to the Somme. Aiming to highlight the British government's inaction when it came to pardoning 300 British soldiers shot for cowardice during WWI (most of which were suffering from shell shock).

The deeply moving production centres on Private Tommo Peaceful, a youngster from Devon who is inspired by his older brother to join the fight for his country, as well as a fear of being named a coward for not enlisting. The action unfolds during a single night in 1916. After the naive eighteen-year-old disobeys the commands of his Captain, he is court-martialled for cowardice and is forced to wait before his death by firing squad at dawn. During these precious hours, he recounts the joyful highs of his countryside life, adventures with his childhood sweetheart and days at school, before reckoning with his unimaginable fate.

Sound good to you? Share this page on social media and let your friends know about Private Peaceful at Garrick Theatre.