Sorry! You missed Rip It Up at Garrick Theatre 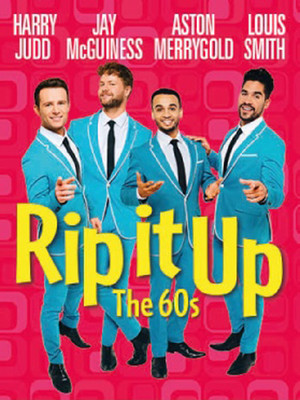 Why See Rip It Up?

A brand new 60's spectacular is heading to London's West End this February courtesy of some of Britain's favourite stars! Join Aston Merrygold, Louis Smith, Jay McGuiness and Harry Judd as they bring you an evening of entertainment like no other.

Featuring music from the likes of The Beatles, The Rolling Stones, The Who and The Beach Boys Rip It Up will showcase the very best that the 60s had to offer. With spectacular feats of gymnastics (courtesy of Olympic gold Medalist Louis Smith), drumming by McFly's Harry Judd and vocals from JLS' Aston Merrygold and The Wanted's Jay McGuiness this really is an event not to be missed!

The boys will also show off their Strictly Come Dancing (a show which they have all been a part of) skills as they perform beautiful dance routines from the era.

Seen Rip It Up? Loved it? Hated it?

Sound good to you? Share this page on social media and let your friends know about Rip It Up at Garrick Theatre.