You are viewing a past performance of Les Miserables

You can catch Les Miserables at the Sondheim Theatre, showing Open Run 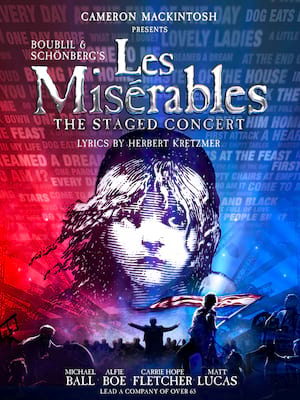 A new concert version with a whole host of stars!

After almost 35 years at its original home at the Queen's Theatre, the iconic Les Miserables is on the move... but don't fret, Cosette, it's not going very far! In this new semi-staged concert performance, the creme de la creme of the West End stage will head to the iconic musical. Don't miss the likes of Alfie Boe, Michael Ball, Carrie Hope Fletcher and Matt Lucas as they give you all the Les Mis goosebumps!

Over 70 million people in 42 different countries have enjoyed the spectacular adaptation of Victor Hugo's masterpiece since it premiered on the West End in 1985. Now enjoy Les Miserables like never before in this stripped-down, but still jaw-dropping production.

WHAT IS LES MISERABLES ABOUT?

Jean Valjean is released from prison after almost 20 years in captivity for stealing a loaf of bread, soon after, he breaks his parole and flees to start a new life free of crime. Eight years later, he has worked hard to give himself a better standing in life. However, none of his endeavours impress his embittered parole-officer - the bloody-minded Javert - who will stop at nothing to see Valjean behind bars once again.

MUSICAL HISTORY IS MADE

This Olivier and Tony-winning musical includes the songs "Who Am I", "A Little Fall of Rain", "One Day More", "Bring Him Home" and, one of the most famous songs to come from the West End, "I Dreamed a Dream". Colloquially known as Les Miz, the musical actually started out as a French-language concept album. The first musical-stage adaptation of Les Mis was presented at the Palais des Sports, in 1980.

It was not until 1983 that producer Cameron Mackintosh received a copy of the French concept album from director Peter Farago. Two years later, Les Miserables took to the Barbican stage, and the rest, as they say, is history. The stage musical also inspired a live-action musical film in 2012, starring Hugh Jackman, Russell Crowe, and Anne Hathaway in her Oscar-winning role as the doomed Fantine.

Hugo's momentous story has most recently been revived in a six-part drama by the BBC, however, this latest offering doesn't include our favourite tunes (boo!).

Les Miserables has been translated into 22 different languages including Icelandic, Japanese and Mauritian Creole!

Les Miserables may be inappropriate for children aged under 14. Children under four years of age will not be admitted.

Two hours and 50 minutes with one 20 minute intermission

Latecomers will not be admitted until a suitable break in the performance.

Please note that the images are taken from the production at the Queen's Theatre and may not reflect the current cast.

The world has embraced 'Les Mis' with both arms.

As the first trumpet sounded and the curtain rose I was sucked into 19th century France along with the inner turmoil of our hero Jean Valjean, played by the fantastic Killian Donnelly.

Sound good to you? Share this page on social media and let your friends know about Les Miserables at Gielgud Theatre.