Sorry! You missed Strangers On A Train at Gielgud Theatre 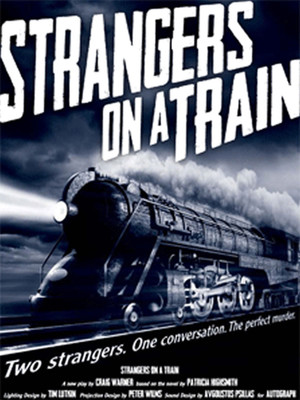 Strangers On A Train

Two strangers. One conversation. The perfect murder. A magnificent journey of suspense you won't want to miss.

Why See Strangers On A Train?

An adaptation of Patricia Highsmith's debut novel, Strangers on a Train brought a delightful sense of the macabre to The West End in 2013. The story of a seemingly innocuous conversation that leads to murder, this production was written by Craig Warner, who rightly presumed that the novel's essentially two-handed structure would make for a fantastically tightly plotted theatrical thriller.

Strangers on a Train ran from 19th November 2013 until 22nd February the following year and garnered a heap of critical praise along the way. Quentin Letts called it a "spine-snapper of a stalker tale", while The Telegraph branded it "an ingenious, grippingly nasty pleasure". The set design was singled out for particular praise, as was the stylishly noirish direction by Robert Allan Ackerman.

In the lead roles of Bruno and Charles were Jack Huston and Laurence Fox. Jack Huston is maybe best known for his role as disfigured psychopath Richard Harrow on Boardwalk Empire, while Laurence Fox is a RADA alumni who played James Hatheway on Lewis.

What is Strangers on a Train About?

Guy Haines meets Charles Bruno on a train, and the two men strike up a conversation. Haines confides in his fellow traveller that he desperately wants to divorce his unfaithful wife Miriam, while Bruno returns the confidence by telling Charles of his desire to get rid of his father, who is sitting on top of a rather large fortune. Bruno then proposes a scheme that could solve both their problems - the two should 'swap murders', with Bruno killing Miriam and Charles murdering Bruno's father. This plan would be the perfect crime, because the police would never link either man to their respective crimes because of a complete lack of motive.

Thinking it no more than a grisly joke, Charles thinks no more about it. That is until he returns home one day to discover that Bruno has killed Miriam, and is keen for Charles to honour their agreement...

Ignore the bad reviews, this play has an excellent cast and is a riveting... more

Attended the matinee this afternoon and we both really enjoyed the whole... more

Sound good to you? Share this page on social media and let your friends know about Strangers On A Train at Gielgud Theatre.