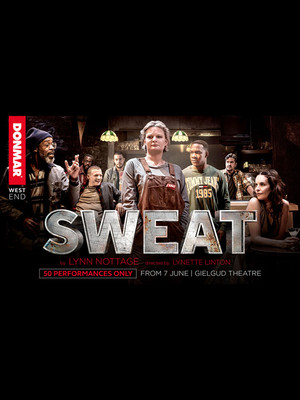 a knock-out blow of theatrical force

After a five-star run at the Donmar Warehouse, Lynn Nottage's Pulitzer Prize-winning play, Sweat heads to the Gielgud for a strictly limited 50 performance run this June. Branded as a "breathtaking new play" (Guardian) Sweat dives into the heart of forgotten middle America and the communities that are left behind.

Based upon the town of Reading, Pennsylvania, a once-thriving industrial own which has left to rot in modern times, Sweat centres on the town's divided inhabitants. With simmering racial tensions, anger and resentment encompassing them, Reading's locals are heading towards disaster.

Whilst conceiving the play Nottage headed to Reading which, at the time (2011), was one of the United States' poorest towns. With its poverty level at over 40%, Nottage talked and interviewed its residents, exploring what happens to the communities left behind after de-industrialisation, and how they struggle to survive.

Shocking yet real, SWEAT is as timely as ever

After a five star run at one of London's most exciting venues, Lynn Nottage's SWEAT moves from the Donmar Warehouse to the bright lights of Shaftesbury Avenue where it is grinding away for a limited six-week run.

Seen Sweat? Loved it? Hated it?

Sound good to you? Share this page on social media and let your friends know about Sweat at Gielgud Theatre.