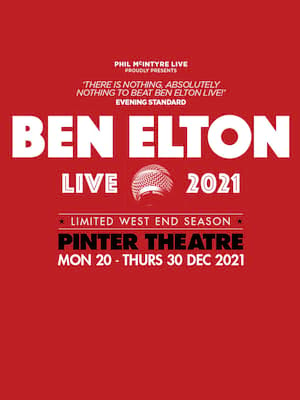 The last time I toured I was still smarter than my phone. Things have definitely taken a funny turn

1980's era-defining comedian Ben Elton returns to the stage for the first time in 15 years to explore the modern age, bringing his hilarious perspectives with him. Whilst it might not be your usual Christmas show, don't miss your chance to see Ben in London, where he'll be taking up residence at the Harold Pinter Theatre from December 20th - 30th.

As the 'Godfather' of modern stand-up, Elton's 1987 and 1988 shows Motormouth and Motorvation cemented him as one of the scene's most outspoken voices, with his left-leaning politics, ranting style, and quick wit capturing public consciousness.

Since then, he's translated his comedy stylings into television (Blackadder, The Young Ones, Upstart Crow), film (All is True), literature (Dead Famous, Stark, and 2019's Identity Crisis) and musicals (We Will Rock You, Love Never Dies), becoming a prolific and insightful creator with an unfettered ability to say it very much like it is - a much-needed talent in today's crisis and outrage ridden age.

Sound good to you? Share this page on social media and let your friends know about Ben Elton at Harold Pinter Theatre.