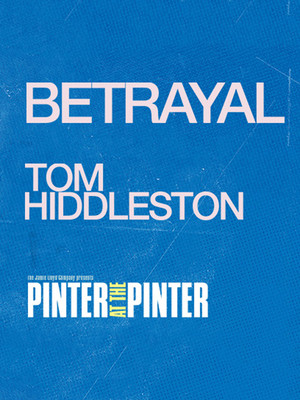 Hiddleston at the Pinter

After baffling the Twittersphere following a cryptic tweet, Tom Hiddleston has announced his stage return in Harold Pinter's Betrayal, the final work in the illustrious director Jamie Lloyd' Pinter at the Pinter season, celebrating the late playwright's iconoclastic influence on modern drama. Starring alongside him are Zawe Ashton and Charlie Cox.

Following on from The Dumb Waiter/A Slight Ache, the last in the series of one-act plays that have been inhabiting the Harold Pinter Theatre for the better part of winter, Betrayal tells the story of an affair in reverse, and showcases Pinter in a poignant mood. Based on his own seven-year romance with Joan Bakewell, it is often regarded as one of his best plays, containing his trademark wit, observations and undercurrent of malice as the central couple; Emma and Jerry, navigate the stormy waters of infidelity.

Last seen on the West End in Coriolanus (via a special performance as Hamlet at the Royal Academy of Dramatic Arts), Hiddleston is a prolific performer whose career has seen him go from Olivier's Best Newcomer in 2008 to the lofty heights of Hollywood as mischievous villain Loki in the Marvel Franchise. But whether you know him as a God or a Danish Prince, its certain that Hiddleston is one of the finest actors of his generation and this is a not to be missed opportunity to see him in his element.

Betrayal is a stunning night at the theatre, that entertainingly and uncomfortably serves up some home truths. It might not have the after effect you're hoping for, but it’s a fine example of British talent, old and new.

Whilst Betrayal's subject matter might not hew close to any of the recent delights offered up by the Pinter at the Pinter season and director Jamie Lloyd, it is a smashing piece of theatre, excellently acted and devastatingly real.

Seen Betrayal? Loved it? Hated it?

Sound good to you? Share this page on social media and let your friends know about Betrayal at Harold Pinter Theatre.