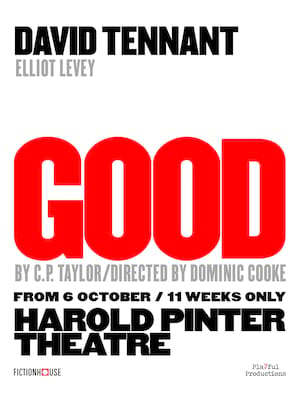 David Tennant headlines the highly-anticipated revival of C.P. Taylor's Good, in this brand new staging directed by Dominic Cooke. The first project from Cooke's new Fictionhouse production company co-founded by himself and former executive director of the Royal Court Kate Horton, Good is a haunting treatise on how seemingly sane, normal people found themselves seduced by the evils of Nazism. Exploring the rise of John Halder from a liberal professor to an integral part of the Nazi regime, Taylor details the moral gymnastics and willful detachment that saw the fanatical lunacy of Hilter followed to the darkest hour in modern history.

Both Cooke and Tennant are compelled by the play's pertinence, with Cooke expressing: "We are in danger of that happening now. Not just politically but in terms of the environment, how we seem to collectively be able to ignore the evidence in front of us. It is a play really about denial."

A far cry from Tennant's last appearance in the West End as the rakish scoundrel Don Juan in Patrick Marber's Don Juan in Soho in 2017, it looks as if this might be one of the defining performances of the year.

Sound good to you? Share this page on social media and let your friends know about Good at Harold Pinter Theatre.