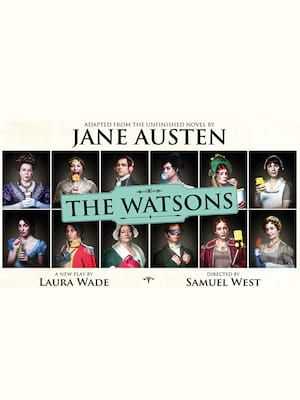 It fizzes with life, rattles along at a cracking pace and provides an entertaining an evening as I've seen this year.

Why See The Watsons?

It is a truth universally acknowledged, that an off-West End production with rave reviews must be in want of a West End run... and thus The Watsons wish is granted! After thrilling audiences and critics alike at the Menier Chocolate Factory, Laura Wade's stunning stage adaptation of Jane Austen's famously unfinished novel heads to the Harold Pinter in May!

A classic of her style, the heroine Emma Watson is intelligent and headstrong as she is cast into polite society to find a husband before spinsterdom claims her. With a queue of potential suitors and a decision to make, she is then suddenly cut off after Chapter 5.

Now, Olivier winning playwright Laura Wade (Posh, Home, I'm Darling) takes up the thread of Emma's tale in this fizzing production. Asking what can characters do after their author abandons them, Wade presents a suitably hilarious ending to Austen's beginning. Samuel West returns to direct this West End transfer.

Please note that the images used are from the original Menier Chocolate Factory production and may not reflect the current cast.

Charming and riotously entertaining, and like the woman whose work it's based on - packs a memorable and satirical punch.

The wit and heart of Jane Austen shines brightly in this dazzlingly written and executed deconstruction of an early, unfinished work from the famous author, fantastically completed' by Laura Wade.

Seen The Watsons? Loved it? Hated it?

Sound good to you? Share this page on social media and let your friends know about The Watsons at Harold Pinter Theatre.