Sorry, it looks like Uncle Vanya is no longer happening on these dates 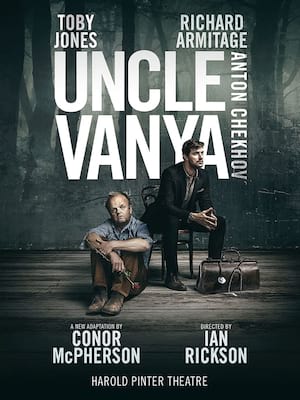 Starring Toby Jones (Detectorists, Tinker Tailor Soldier Spy) and Richard Armitage (The Hobbit, The Crucible), Chekhov's tragi-comedy returns to the West End in a new re-imagining from Girl From The North Country scribe Connor McPherson, with direction from Ian Rickson.

A classic of 19th-century theatre, Uncle Vanya continues, some 120 years after its premiere, to resonate with audiences all over the world with its universal themes of ennui, dashed ambitions and unrequited love never going out of fashion.

If you thought your family reunions were tough, spare a thought for Vanya (Jones), whose life is turned upside down by the appearance of his late sister's husband and his glamorous new wife Yelena. Interrupting his daily schedule of bemoaning provincial ennui with his friend Astrov (Armitage), he not only has to deal with his pompous dear brother-in-law (and landlord) and his money-making schemes - notably selling the Estate Vanya has loyally managed for him for many years - but with mounting feelings for the beguiling woman who has taken his sister's place. He better act fast though, because Yelena's admirers have already begun forming a disorderly queue...

The text is modernised but sensibly so. There's a welcome traditional... more

Sound good to you? Share this page on social media and let your friends know about Uncle Vanya at Harold Pinter Theatre.