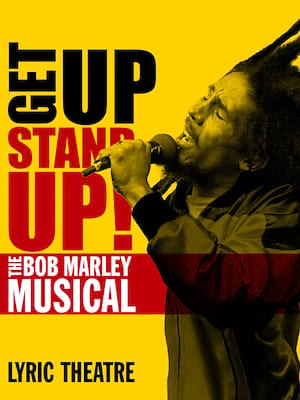 Images from the official production

Get Up, Stand Up! The Bob Marley Musical

Why See Get Up, Stand Up! The Bob Marley Musical?

With a book by Billy Elliot's Lee Hall and direction from Clint Dwyer, this brand new musical follows Marley's rise to superstardom and his cementation as one of the globe's most important artists. Stage favourite Arinze Kene will star as Marley himself in one of the anticipated musicals of the year.

Not only does the production boast of a stellar cast and creative team but it also features some of Marley's most iconic hits, including, "No Woman, No Cry", "Exodus", "3 Little Birds" and of course the titular "Get Up Stand Up"!

This brand new project also has the Marley family stamp of approval with Bob's daughter, Cedella, saying "Our father's music means so much to so many people around the world, we're beyond thrilled to be able to bring it to both fans and new audiences alike in a new way led by the stellar team of Lee and Dominic, and starring the fantastic Arinze. As a family we feel that our father would be proud to know that his legacy is a source of creative inspiration and continues to bring people together."

Beginning his music career in the early '60s Bob spent most of his early career writing, producing and recording with fellow musicians Peter Tosh and Bunny Wailer under the name "Bob Marley and the Wailers". Although the group split in 1974 Marley continued to produce music underneath the group's Wailers name. Releasing over 13 studio albums Marley enjoyed much success in Jamaica and across the globe, including the US and the UK. Marley is widely heralded as the father of popular reggae with his popularity bringing further attention to conversations about Rastafarianism and cannabis use.

Great show had us all standing and dancing the last half hour never seen... more

How could this musical fail when every song is by Bob Marley. The show... more

Sound good to you? Share this page on social media and let your friends know about Get Up, Stand Up! The Bob Marley Musical at Lyric Theatre.