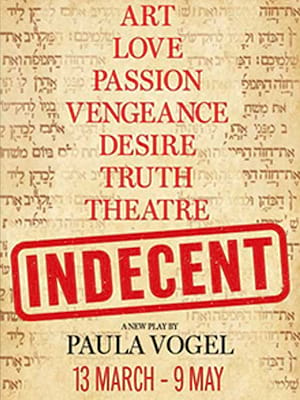 It's a fierce ensemble piece that celebrates the life-altering, life-saving power of the theater

TEMPORARILY POSTPONED: This performance has been suspended. We will update this page once we have more information.

The Tony-Winning Play Comes To London

Chronicling the controversy surrounding Polish-Jewish dramatist Sholem Asch's 1923 Broadway play God of Vengeance, Indecent presents a fascinating history of the piece, right from its inception in Warsaw in the early 1900s to the World War II era, when it was performed as an act of artistic resistance in German-occupied Poland. Told through the eyes of Asch and the play's performers, it uses masterful storytelling to highlight the still topical themes of homophobia and xenophobia with stunning results.

Seen Indecent? Loved it? Hated it?

Sound good to you? Share this page on social media and let your friends know about Indecent at Menier Chocolate Factory.