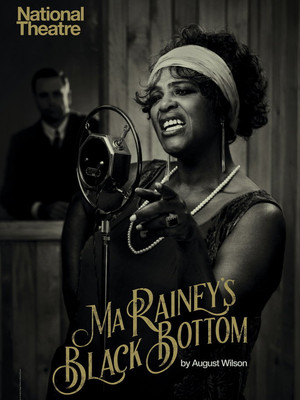 The National Theatre continues its tenure under Rufus Norris, producing more interesting works than ever before, touching on a diverse range of subjects and breathing life into forgotten classics, old and new. One of these is the revelatory Ma Rainey's Black Bottom, the first in August Wilson's Pittsburgh Cycle of plays that narrate the black experience in the 20th Century.

Starring West End veteran Sharon D Clarke as the real life Mother of the Blues, Ma Rainey, this tight ensemble piece examines black history against white exploitation as Ma and her band try to cut a new disc in a Chicago recording studio. Whilst Ma is an imperious diva in her studio, both her and her quarrelling band find themselves stuck below the all-white producers and engineers as they wrestle back creative control in this poignant and electric battle of will.

However, secondary conflict between the band members themselves explodes as the young upstart trumpeteer ostracises his two bandmates - he is desperate to carve out his own career as leader of his own group. When the promise made to him by the white producer comes to nothing, his temper takes an out of control spin, leading to tragedy for everybody there.

Suitable for ages 13+ due to strong and racially charged language

Two hours and 35 minutes including one intermission

Sound good to you? Share this page on social media and let your friends know about Ma Rainey's Black Bottom at National Theatre, Lyttelton.