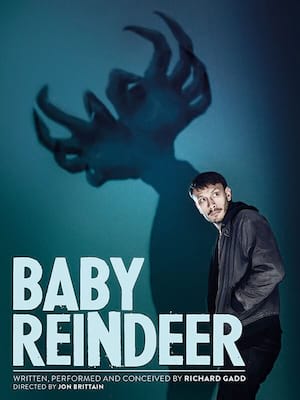 Nominated for Outstanding Achievement in Affiliate Theatre at the 2020 Olivier Awards!

What began with an off-hand kind gesture to a lonely looking customer at his pub soon sent comedian Richard Gadd's world into a tailspin, becoming a seven-year ordeal at the hands of a dangerously obsessive stalker. Now Gadd, the recipient of some 41,000 emails, 305 abusive voicemails, and myriad other horrific instances of harassment has taken his experience and translated it into one of the year's most transfixing shows.

Directed by Jon Brittian Baby Reindeer's searing fusion of theatre and comedy ala Flegbag, this one-man show was an instant success at 2019s Edinburgh Fringe, opening the door for a sell-out run at the Bush Theatre in October ahead of this eagerly anticipated West End transfer.

Winner of the 2016 Edingburgh Comedy Award for his show Monkey See, Monkey Do, Richard Gadd has emerged as one of the strongest comedic talents on the scene. With his trademark honesty, deeply personal reflection and knife-edge intensity, Baby Reindeer is set to rise Gadd's star even higher.

Sound good to you? Share this page on social media and let your friends know about Baby Reindeer at Ambassadors Theatre.