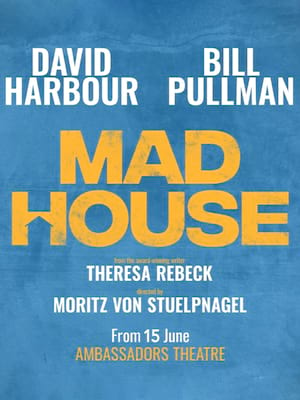 A family reunion. Time to pay your last disrespects

The Ambassadors Theatre plays host to the world premiere production of this pitch dark comedy from Therese Rebeck, starring David Harbour (Stranger Things) and Bill Pullman (Independence Day). Detailing the return of a group of siblings to their dying father's bedside, and the inevitable row about money that ensues, Mad House offers a comic exploration of sibling rivalry - of the worst kind.

David Harbour
Although he has worked solidly over 20 years, it was his portrayal of grumpy yet soft-hearted Sheriff Jim Hopper in Netflix's Stranger things (for which he scored Emmy and SAG award nominations) that brought him to Mainstream attention. David Harbour made his West End stage debut in 2006 in Who's Afraid of Virginia Woolf.

Bill Pullman
Continuing the alien connection, Bill Pullman is best known for his turn as The President on 1996's Independence day. Additionally, he's starred in scores of movies, alongside a rich theatrical career on Broadway. His West End debut was in 2019 in The Old Vic's All My Sons.

Sound good to you? Share this page on social media and let your friends know about Mad House at Ambassadors Theatre.