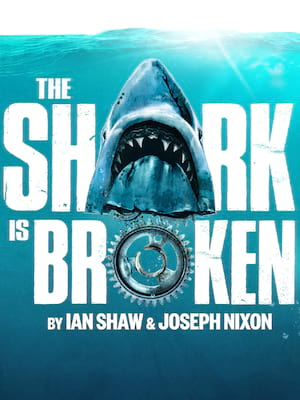 an intoxicating combination of behind-the-scenes gossip and contemplation of the nature of popular art.

Why See The Shark is Broken?

Three men in a boat

It's the summer of 1975 and somewhere in the water near Cape Cod, three men are sitting in a boat waiting for their colleague to get it together so they can film a scene of what is about to become one of the biggest blockbuster movies ever. The colleague is a giant mechanical shark and the men are Robert Shaw, Roy Scheider, and Richard Dreyfuss, human co-stars of Jaws.

Following sell-out success at the Edinburgh Festival, this hit comedy, written by Joseph Nixon and Ian Shaw (son of Robert) finally transfers to the West End this winter. Based on Robert Shaw's own drinking diaries during the shoot, we learn how the trio, fuelled by alcohol and ambition, passed the time bullying, bickering, and bragging while sitting out the interminable delays caused by their Great White co-star.

Seen The Shark is Broken? Loved it? Hated it?

Sound good to you? Share this page on social media and let your friends know about The Shark is Broken at Ambassadors Theatre.