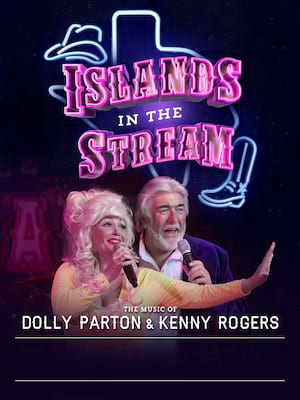 All logos, graphics and images are property of the production

Islands In The Stream

Enjoy a superb score and supreme musicianship as we bring the house down with the ultimate tribute to two country music legends.

Why See Islands In The Stream?

They got something going on!

It's time for a good ol' fashioned hoedown as this lively tribute to the King and Queen of Country music, Dolly Parton, and Kenny Rogers rolls into town! Bursting with joy, energy, and spectacular song after song, including 'Jolene' 'Ruby', 9 to 5', 'Lucille', 'Here You Come Again', 'The Gambler', 'I Will Always Love You' and many more, Islands In The Stream is the top-rated tribute to the duo and is guaranteed to have you up and dancing in the aisles!

The one and only Backwoods Barbie, who never saw a sequin she didn't like, Dolly Parton is truly an icon. Alongside, Kenny Rogers has also risen to country royalty. The duo's collaboration on 1983's 'Islands in the Stream' only secured their reign as the genre's King and Queen.

'Islands in the Stream'might be recognised as country anthem now, but penned by the BeeGees, they originally had a very different artist in mind. We'd have loved to have heard Marvin Gaye's take on it too!

Seen Islands In The Stream? Loved it? Hated it?

Sound good to you? Share this page on social media and let your friends know about Islands In The Stream at New Wimbledon Theatre.