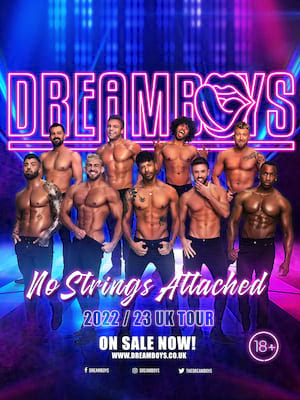 Take a deep breath, enjoy the show, and embrace the irresistible.

Too Hard To Resist tour

Oh la la! The perfectly chiseled torsos and suggestable swingin' hips of The Dreamboys are coming your way on their brand new tour, bringing you a steamy show full of surprises! Joining the 'boys this year are Love Island's Michael Griffiths, Lotan Carter, and Rogan O'Connor. Get ready for a stunning night of world-class choreography that promises to leave you begging for more as these world-class entertainers stride into town.

Currently comprising of Micheal Griffith, Lotan Carter, Rogan O'Conner, Kane Silver, Zac Smith, Shane Tyler, Richard Smikle, Chris Hunter, and Pjay Finch, Dreamboys have been conjuring up their steamy shows since 1987, but it was their Stringfellows launch in 2000 that really put them on the map. Known for their full frontal approach, which once even had Princess Diana blushing, there is a little bit of something for everyone at every Dreamboys show.

Seen The Dreamboys? Loved it? Hated it?

Sound good to you? Share this page on social media and let your friends know about The Dreamboys at New Wimbledon Theatre.