Sorry! You missed All About Eve at Noel Coward Theatre 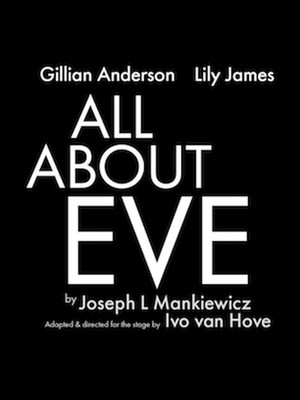 All About Eve works terrifically, in part because the cast and script are excellent, in part because Can Hove's usual box of live video tricks is so apt for a story that always felt half of film, half of theatre

Why See All About Eve?

In the immortal words of Bette Davis, "Fasten your seatbelts, it's going to be a bumpy night". The iconic movie that saw both Davis and Anne Baxter compete for an Oscar is finally being made into a stage play. Directed by Ivo van Hove, All About Eve will star Gillian Anderson as the Margo Channing, alongside Lily James as interloper Eve.

IS she all that she seems?

The original Single White Female, All About Eve follows the story of beloved 1940s Broadway star Margot Channing, whose glittering success both on the stage and in her personal life are threatened by the appearance of the youthful superfan and new assistant, Eve.

What begins as adoration soon turns to a dangerous obsession as Eve insinuates herself into every aspect of Margot's life. Increasingly isolated and paranoid of her new shadow, Margot finds herself sprawling into madness as Eve's scheming begins its final, horrifying stage.

In addition to Gillian Anderson as Margo and Lily James as Eve, this compelling new production also stars Julian Ovenden, Sheila Reid, Olivier nominee Monica Dolan, and Rhashan Stone with music from none other than PJ Harvey!

The movie is notable for the two lead actresses and two supporting actresses going head to head for the respective 1951 Academy Awards; Bette Davis and Anne Baxter for Best Actress, whilst Celeste Holm contented with Thelma Ritter, who played the canny maid. None of these four won the Oscar, however George Sanders won the Best Supporting Actor gong for his role as the sly columnist Addison DeWitt. The movie was nominated for a staggering 14 awards, winning six.

Based on the 1950 film by Joseph L. Mankiewicz, and 1946 short story by Mary Orr, All About Eve, now playing at the Noel Coward Theatre, tells the all too familiar tale of a successful woman Margo Channing usurped by a younger fan.

There are two reasons to go to this. 1. to see Gillian Anderson throw... more

Sound good to you? Share this page on social media and let your friends know about All About Eve at Noel Coward Theatre.