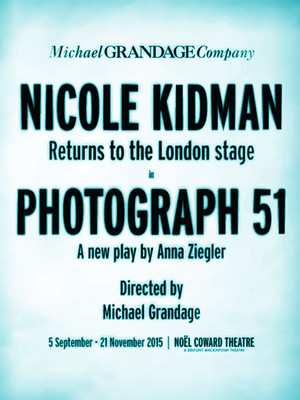 ". It's a commanding, intelligent performance and my only complaint about Anna Ziegler's intriguing, informative 95-minute play is that it is not longer."

Nicole Kidman returns to the London stage for the first time in 17 years in the UK premiere of Photograph 51. Telling the story of one of modern science's forgotten pioneers, Rosalind Franklin, it marks the Oscar-winning actresses' first West End appearance since her much-talked about turn in The Blue Room. With one of the most varied and acclaimed filmographies of recent times to her name, the Australian's most recent big screen ventures include Paddington, Before I Go to Sleep and Stoker.

Anna Ziegler's play is directed by former Donmar Warehouse Artistic Director Michael Grandage, who has a knack for luring big names to the London stage. His tenure at the Donmar including appearances from Judi Dench, Jude Law and Kenneth Branagh. He also stepped behind the camera last year to direct upcoming historical drama Genius, also starring Kidman, which revolves the famed book editor Max Perkins.

What is Photograph 51 About?

Rosalind Franklin was a tenacious British chemist who more than held her own in the male-dominated scientific field of the 1950s. During her three year fellowship at King's College London she played a crucial, and criminally overlooked, role in the discovery of DNA's Double Helix. Photograph 51 delves into the ambition and all-consuming hunger for discovery which led to this scientific breakthrough, and the reasons why Franklin was for so long nothing more than a historical footnote.

Seen Photograph 51? Loved it? Hated it?

Sound good to you? Share this page on social media and let your friends know about Photograph 51 at Noel Coward Theatre.