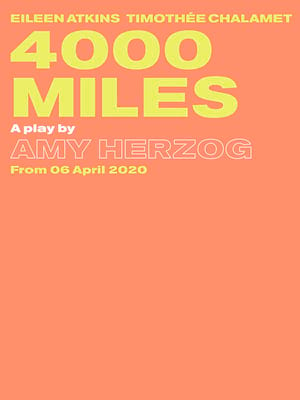 It was to finish something I started. Micah and I started something. I finished it. That's it. People want to make it really complicated but it's not

Matthew Warchus's starry 5th season as Artistic Director of the Old Vic continues apace as Oscar-nominated wunderkind Timothee Chalamet teams up with Dame Eileen Atkins for a major staging of this Pulitzer Prize-nominated work from Amy Herzog. Described in turn as a 'gorgeous', 'truthful and touching', 'odd couple' style play Chalamet marks his West End debut as the youthful Leo, whose surprise arrival at his Grandmother Vera's Greenwich Village apartment following a West to East coast cycling trip, opens up a tender connection between the two.

Best known for his career-defining role as precocious teenager Elio in the Oscar-Winning Call Me By Your Name, Chalamet is at 23, one of Hollywood's hottest actors. With leading roles in Netflix's The King, the upcoming Little Women adaptation and more, 4000 Miles represents an exciting opportunity to see how his talents extend to the stage.

Alongside, Atkins, fresh off the Broadway run of the Height of the Storm with Jonathan Price, brings over 50 years of experience the piece. With three Oliviers (plus a BAFTA an Emmy for good measure) she is a national treasure, her unmistakable presence, and innate brilliance the credit of some of the most popular films, television and stage works of the last five decades.

Sound good to you? Share this page on social media and let your friends know about 4000 Miles at Old Vic Theatre.