Sorry! You missed All My Sons at Old Vic Theatre 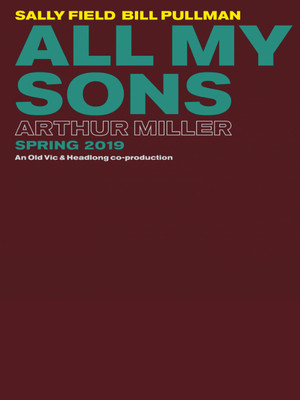 Sally Field and Bill Pullman deliver a Miller for our times

Why See All My Sons?

The tragedy of the everyday man

A luminary of stage and screen, Sally Field is set to tread the boards of the Old Vic this spring, opposite Bill Pullman as the two make their West End debuts in Arthur Miller's 1947 scathing family drama. Directed by Jeremy Herrin (of Wolf Hall Parts One & Two), this new production will reintroduce audiences to Kate and Joe Keller, a married couple overcome by guilt and denial have overcome love and trust in the aftermath of WWII. Also starring will be Jenna Coleman and Colin Morgan.

Miller's first successful work and his most controversial, All My Sons is a transfixing criticism of the American Dream and the implied bliss of the family unit. So much so, it landed Miller before the House Un-American Activities Committee during the infamous Red Scare of the 1950s.

What is the story of All My Sons?

Greed, secrets and lies form the main plot of this dark tragedy. Joe Keller is a successful businessman who lives a comfortable post-war life with his family. However, the secret of Joe's success is about to be blown wide open. During World War II, Joe sold faulty engines to an unwitting US Air Force, leading to the entirely preventable deaths of a number of young and innocent pilots.

Hoping to take this shame to his grave, this is dashed when one night with the arrival of the daughter of his former business partner, who took the fall for the outrage, and is now languishing in jail. Joe's son Chris hopes to marry Ann, the daughter; but when Joe's treachery comes to light, not one, but two families are left devastated with his actions.

Both instantly recognisable for their work across the media, this venture will mark the first time the pair have appeared on the London stage. But with Field's double Oscars and many prizes besides and Pullman's extensive experience, we can bet this is going to be a scintillating chance to see these two in action.

Seen All My Sons? Loved it? Hated it?

Sound good to you? Share this page on social media and let your friends know about All My Sons at Old Vic Theatre.