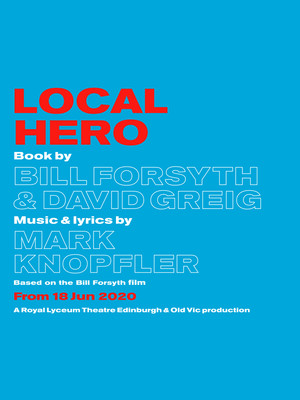 Based on the BAFTA winning 1983 film

Knox Oil will consider any price

An American oil executive gets far more than he bargained for in this brand new musical adaptation of Bill Forsyth's 1983 film, heading to the Old Vic for summer 2020.

On arrival in a small fishing village in Scotland, aforementioned oil exec Mac MacIntyre is tasked with convincing the locals to sell up in favour of his boss's plan to replace the beautiful spot with a whacking great oil refinery. Whilst some jump at the chance to get rich quick, others are not so keen. As the eccentric characters of the village battle over their homes' worth, Mac slowly discovers that the quaint old place harbours something far more valuable than oil...

Adapted by Forsyth and David Greig, and with direction from John Crowley, Local Hero also retains the music and lyrics from its celluloid counterpart, from none other than Dire Straits frontman Mark Knopfler.

Sound good to you? Share this page on social media and let your friends know about Local Hero at Old Vic Theatre.