Sorry! You missed The Understudy at Palace Theatre 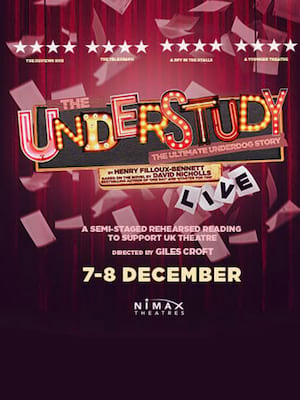 Why See The Understudy?

The Palace Theatre opens its doors for two special performances this December as David Nicholl's best-selling novel debuts to the West End in this semi-staged, rehearsal production. Starring Lee Mack and James Norton alongside James McNicholas, Marie Lawerence, Mina Anwar, Lizzie Muncey, Natalie Casey, and Sasha Frost. Don't miss your chance to catch this exciting cast as they bring the story of Nicholl's beleaguered understudy to life in one of Theatreland's most sumptuous surroundings.

Telling the sorry tale of actor Stephen Mcqueen, The Understudy follows his less than stellar career from Rent Boy 3 in The Bill to his newest and best role to date - the lead in a big-budget West End show. Well, sort of. He's understudying for the film star Josh Harper as the lead in big-budget West End show. Now on the edge of stardom, it's time to reflect on his past, including his acting, his failed marriage, and the general disappointment he's become. Not only that, old habits die hard as he casts his eye on his very famous colleague's wife...

Directed by Giles Croft and adapted from David Nicholl's book of the same name, this limited run is sure to be a treat for theatre and book lovers alike.

Sound good to you? Share this page on social media and let your friends know about The Understudy at Palace Theatre.