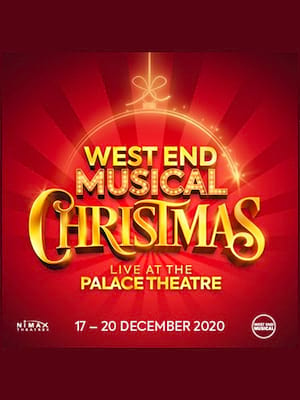 Christmas comes to the West End!

Add some sparkle to your Christmas celebrations with a trip to the Palace Theatre. Just in time for the year-end festivities, the historic London venue brings West End Musical Christmas to the stage for six special showings only. From the 17 - 20th of December, the toast of the London theatre scene will join forces to sing a dazzling array of classic Christmas carols and the musical theatre hits that made them.

Performers set to light up the stage include Sophie Evans (Glinda in Wicked), Alice Fearn (Elphaba in Wicked), Leyton Williams (Jamie in Everybody's Talking About Jamie), Shanay Holmes (Rachel in The Body Guard), Rachel John (Angelica Schuyler in Hamilton), Trevor Dion Nicholas (George Washington in Hamilton), and Ben Forster (The Phantom in The Phantom of The Opera), amongst others.

Part of Nimax Theatre's socially distanced end of year season, the song and dance spectacular comes from the creative team behind West End Musical Drive In and West End Musical Brunch, in partnership with celebrated theatremaker Nica Burns. The theatre's capacity has been reduced and other measures, such as taking the temperature of the guests, regular deep cleaning and, contactless tickets, have been taken to ensure the venue is Covid secure.

Sound good to you? Share this page on social media and let your friends know about West End Musical Christmas at Palace Theatre.